It’s my favorite time of the year! On Sunday, the New England Patriots will be taking on the Philadelphia Eagles in Super Bowl 52 in Minneapolis.

It’s no shocker who’s coming out of the AFC. The Patriots, appearing in their 8th Super Bowl since 2000, are looking to clinch an NFL record-tying 6th Super Bowl win.

The Eagles were more of a surprise. After being the top seed in the NFC during the regular season, starting QB and MVP candidate Carson Wentz tore his ACL in Week 14, and spirits in Philadelphia were anything but high when he went down. But with consistently stellar defense and an unexpectedly strong showing from QB Nick Foles this postseason, the Eagles will be appearing in their 3rd Super Bowl.  A win next weekend would be their 1st win in franchise history.

Being born and raised in New Hampshire, nothing would make me happier than seeing Tom Brady and the Patriots steamroll the Eagles for their 6th title. It’s also no surprise that I’m in the small minority here. This year’s matchup is the kind of underdog story that makes for a riveting Super Bowl Sunday.

The path to victory for Philadelphia’s favorite footballers is a narrow one, but by analyzing a bunch of NFL stats using ThoughtSpot’s search and AI-driven analytics platform, I’ve found a few ways the Eagles can up their chances of victory.

It’s something of an NFL myth: if you can sack Tom Brady in the playoffs, you have a shot of beating him. After using ThoughtSpot to search through data on how Tom Brady fares when facing pressure over his playoff career, turns out there’s a ring of truth to the myth. If you can sack him often enough. 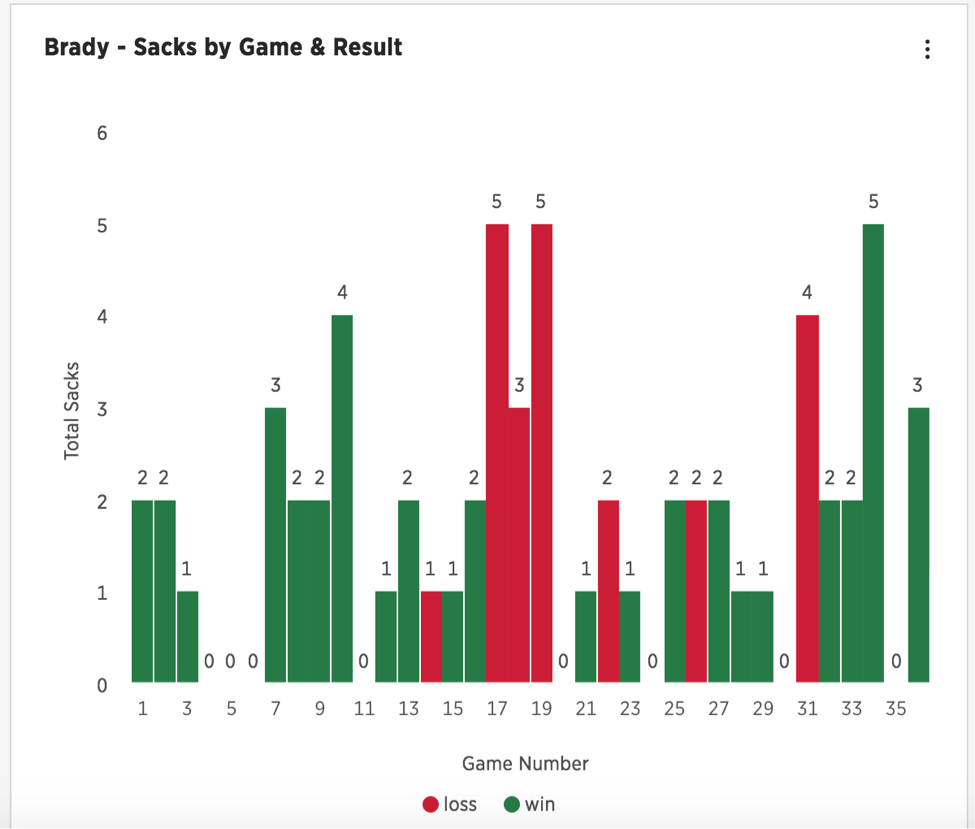 Overall, the Patriots are 4-4 in the playoffs when Tom is sacked 3 or more times. When he is sacked less than 3 times, the Patriots have been 22-5. In 2 out of the last 3 playoff games he played in he has been sacked more than 3 times. He still managed to win, but it’s important to note both of those games took remarkable 4th quarter comebacks by the Patriots to get the win. If the Eagles want to dramatically increase their odds of winning on Sunday, they’ll need to put that defense to work and keep the pressure on Brady.

Take a Few Deep Shots to Jeffrey on the Left

The Super Bowl often comes down to the passing game. By using ThoughtSpot’s search-driven analytics, it was easy to dig deep into where Brady and Foles like to throw the ball on the field.

It’s no surprise that both QBs love going short. Both offenses rely on a lot of short crossing routes and pick plays. Brady seems to spread the ball around over the field more, while Foles heavily favors the right side of the field.

Something I found surprising, however, is Foles’ passing game on the left. Or more accurately, the lack of a passing game of the left. Foles hasn’t thrown a single pass deep to the left side of the field at all this year.

For most offensive plays, the Eagles line up Alshon Jeffery wide and to the left. At 6’3”, Jeffrey is one of the most athletic wideouts in the game today. Given that the Patriots haven’t seen it much on tape, and Jeffrey’s ability to really move the ball, the Eagles may be catch the Patriots off guard with a deep shot to Jeffrey on the left.

Using search to analyze the passing data for Brady and Foles also provides insight into where the Eagles defense needs to focus to win. Brady loves throwing short timing routes to Danny Ammendola or Chris Hogan all over the field. Tom spreads the ball around the field well. That’s due to both his ability and the wideouts to be able to find gaps in any zone coverage. If the Eagles want to seriously cripple the Patriots’ offensive, they need to limit the Patriots short passing game.

As we saw last week, the Jaguars found success over the course of the game by being physical with Patriots undersized wideouts and jamming them at the line. If the Eagles want to limit the Patriots offense, they should follow suit

Nick Foles Needs to Play Up to His Regular Season Standards

Before digging into the insight, there are a few things to note. For one, the playoffs and the regular season are two different animals. Not only is the competition fiercer, but the stakes are also much higher. Over the years, countless QBs have crumbled under the pressure and played significantly worse than they do in the regular season (looking at you Matt Ryan).

Foles has been up and down in his 3-career playoff starts – with 2 good performances and one below-average game vs. Atlanta this year. The sample size is too small to make any judgements from his past performance.

That said, it’s surprising how comparable these 2 quarterbacks are. Tom Brady is regarded by most as the best QB of all time, while Nick Foles has bounced around the league as a second string QB for most of his career. Brady has the slight edge in QBR – 91.1 to 89.02. Foles has been more careful with the ball, with only 0.59 interceptions per game, while Brady has thrown 0.86 interceptions per game over his 36 playoff starts.

While it might feel like the only way to surmount the Patriots is a superhuman feat from Nick Foles, the data shows he doesn’t have to do anything superhuman this Sunday for the Eagles to have a real chance at winning. If he plays like he did in the regular season, this QB matchup will be a lot closer than people predict.

If the Eagles can incorporate these 4 insights into their game plan, they just might pull off the upset and shock the Patriots. But I’m still a Pats fan, and I’m betting Bill Belichick and the Pats will be prepared.