The Good, the Bad, and the Ugly of Becoming Data Driven

Boardrooms across the country are talking about how they must become more data-driven. If data is the new oil, the ability for organizations to mine this data as part of digital transformation efforts is key to winning customers, market share and business survival.

So why then do less than a third of companies describe themselves as data-driven? It seems for all the investments made in gathering and generating data, few are actually able to turn that data into actionable insights. Make no mistake: the technology is there, especially with recent advances in AI-driven analytics – it’s the human elements that persist in holding companies back.

In a perfectly data-driven organization, decisions are made on facts, metrics are used to motivate, data is openly shared, and trust and transparency are prioritized above all else. It sounds simple, but numerous customer stories show that it’s easier said than done.

Based on 20 years of experience in data analytics, including 4-plus as research vice president at Gartner, and now chief data strategy officer at ThoughtSpot, here are my go-to strategies for making the core tenets of data-driven organizations a reality for your business:

Call Attention to the Problem: Gut Feel and Experience

Becoming data-driven means changing the way individuals and teams have been making decisions for decades. In the absence of trustworthy data (i.e. facts), people instinctively fall back on experience, gut feel and tribal knowledge.

There was once a time when this was a reasonably sufficient approach: Picture the small town retailer who knew their customers intimately, or the personal banker, like Jimmy Stewart in “It’s a Wonderful Life.” But nowadays, when so many transactions are digital and take place at such scale, personal interactions are largely replaced with digital interactions.

Sometimes the only way to know a person is through their digital breadcrumbs, if you can get to them. Many organizations capture them, but scarce few are able to mine them at a meaningful level of granularity. 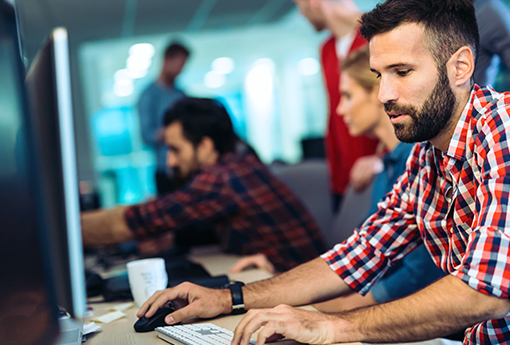 New technologies such as cloud and data lakes allow companies to capture vast amounts of granular data. New analytics tools allow any person, with no training to ask questions of the data using concepts of a Google-like search. Just as you can play your favorite music via a voice command to Alexa, the same is increasingly true of corporate data where a banker could say, “show me top 10 account holders this year versus last year.”

Motivate the Many, Course-Correct the Rest

As data is increasingly shared and exposed, sometimes the stories behind the data reveal broken processes and poor performance. How you act on that data will determine if people try to hide the data – or worse yet, game the system.

Wells Fargo, for example (and for whom I have been a loyal customer for more than 20 years), used data to measure bankers’ performance in cross selling products to account holders. While this sounds like a great idea, the execution was botched. When a customer declined the product, bankers were punished – sometimes with low commissions, other times out-and-out firing. The culture prohibited people from criticizing management for having poorly defined, unrealistic metrics. The bank now faces loss of customer trust and hundreds of millions in fines.

On the flipside, I look at how Learning Circle has used data to help educators teach more effectively – to understand what works with some students and what doesn’t with others. The company also created an early warning system for teachers to intervene when a student starts to show changes in behavior, such as absenteeism, discipline events, or a decline in grades.

This gets back to what I often refer to as “What Is In It for Me.” That is, if you want to become data driven, you have to align your initiative to the goals of the organization, but also to the goals of the individual. If using data means a person will be fired or lose their commission, it’s not a strong motivator for using data. In fact, it’s the opposite: hide the data and sabotage efforts to trust it.

On the other hand, if data improves a salesperson's commission or a teacher’s ability to help students, then it will be met with enthusiasm.

In the U.K., the National Health System is often held up as model for public health care. Several years ago, though, the government launched an initiative to gather and share anonymized patient data, all in the hopes of improving care. However, the public was fearful that their health records could be used against them for conditions of non-employment.

The project, care.data, failed. The newly launched Health Data Research is a second attempt to leverage this data, but with much more transparency and education as part of the initiative.

The scandals of Facebook collecting data, in a less than transparent way, then using the data to sway political elections only adds to public mistrust of how data is captured and used.

Transparency and the ethos of companies who collect the data will prove to be differentiators, with or without government intervention. This lack of transparency and misuse of data has spurred several states attorney generals to launch investigations into Google’s and Facebook’s use of data.

Ethics and culture are closely linked. Is it okay to lie at all costs to win an argument, keep your job, or ensure your company survives? No – but it happens all too frequently. One customer recently referred to numbers that lie and disguise as “vanity metrics.” It’s an apt name as sharing numbers make you appear to be data driven on the surface, but the harsh truth in the data may reside below the surface, in details some leaders hide.

In the past year, we’ve seen Audi come under investigation for engineering a device that produces false emissions test results. Likewise, British Prime Minister Boris Johnson is being investigated for misrepresenting the amount of money sent to the EU as part of the Brexit campaign. We can also add debates on whether or not climate change or the gender pay gap are real issues to this list. The trouble is that each side brings their own data, and it’s hard to know whose is right.

Anytime data is used to lie, it encourages people to rely on their gut rather than the data, and forget about people willingly sharing data. To address this, companies must prioritize trust and transparency over profits. As one CDO recently said to me, “Just because you can do something with data, doesn’t mean you should do something with the data.”

Good intentions matter here, but also proactively evaluating potential misuses and abuses of data can prevent things from going awry. Organizations must also constantly re-evaluate incentives and ensure they do not encourage negative behavior. So for example, when Audi realized their emissions data was not good, was there a culture of integrity despite the negative data and associated costs to address the problem?

When we as a world— a country, an industry— have poor data literacy, it is hard to know whose data to trust and which points are valid. We tend to latch on to the data points that support our arguments or decisions that have already been made, and far too often we minimize data points that portray an alternative view.

Ideally, data literacy would become a core subject in middle school and high school, but in the U.S.A, this is not currently the case. Australia, meanwhile, recently published a data literacy framework for upskilling public sector workers.

Organizations like Girls Plus Data are teaching analytical skills at an earlier age. These workshops capture the inherent curiosity of teenagers on interesting data relevant to them - whether popular names the year they were born or differences in education among boys and girls.

I have also been encouraged to see efforts by universities to offer online and executive education on business analytics. Within organizations, CDOs must offer ongoing data literacy training, using business data in context.

When it comes to fostering an organizational culture of data-driven decision making, having all of the best technology in the world will only get you so far. What’s truly needed is an open, transparent environment where data literacy is the norm, goals and incentives are properly aligned, and everyone plays a role in using data to improve business and the world.