Deploying ThoughtSpot in the Cloud Using Terraform and Ansible

This is the second blog in Cloud Thoughts, a series delving into the details of deploying ThoughtSpot in the Cloud.

Here at ThoughtSpot, our goal is to make analytics accessible for every business person through the power of search and AI. While thinking about these end users, however, we’ve not forgotten the IT warriors who are tasked with developing, building, and deploying the infrastructure to support these business users.

And for these IT pros, nothing looms larger than the cloud.

Fret not, IT ninjas! Deploying a ThoughtSpot multi-node cluster in the cloud is very easy, thanks to the ability to use infrastructure orchestration tools like Terraform in combination with application provisioning frameworks like Ansible.

IT operators who are looking to automate the deployment of their infrastructure and provision ThoughtSpot software to setup a cluster can use this combination of Terraform and Ansible to automate the entire provisioning workflow.

In this article, we’ll show you a step by step process to use Terraform and Ansible to create a fully functional multi-node cluster, including deploying the cloud infrastructure needed to host ThoughtSpot and provisioning ThoughtSpot software on these nodes

If you’re unfamiliar, Terraform is a tool for building, changing, and versioning infrastructure safely and efficiently. Terraform can be used to manage ThoughtSpot infrastructure deployment in all the cloud provider environments that we currently support (AWS, GCP, Azure). Terraform is cloud-agnostic and allows a single configuration to be used to manage multiple providers, and to even handle cross-cloud dependencies.

While Terraform is a great infrastructure provisioning tool, it does not come with a configuration management system. That's where Ansible comes in. We will use Terraform to stand up virtual machines or cloud instances, and then Ansible will be used to provision ThoughtSpot software and create a fully functional cluster.

See this article on how Terraform and Ansible are great companions in the infrastructure and application provisioning lifecycle.

In a prior blog post , we covered how ThoughtSpot cloud deployments make use of cloud compute (VM) instances and an underlying persistent storage layer to form a cluster of nodes.

Deployment use case: In this article, we will show you a suggested recipe to automate the deployment of ThoughtSpot in AWS by creating a four node cluster. For the purpose of this example, we will assume that certain resources have already been created in your AWS environment prior to trying this automation recipe.

The AWS resources you will need to create in advance are:

In addition, you will need to also have the following information ready to start deploying:

To deploy the ThoughtSpot cluster using Terraform and Ansible:

Before starting this step, you will need a deployment server that can access the AWS environment where you are planning to provision the ThoughtSpot infrastructure. This deployment server could also be an existing system used for other centralized orchestration within your environment.

Note: Items (a) and (b) below have been automated via an ansible playbook described towards the end of this section.

Setup terraform and ansible on the server on which you will run this automation workflow (deployment server). Access to the Internet is required from this server to download provider binaries for terraform.

Install ansible on the same server using a package installer like ‘yum’.

Configure /etc/ansible/ansible.cfg with these settings as they are needed to control ssh settings (since we are relying on password based authentication for this example)

To automatically setup the deployment server with the relevant configuration to run this Terraform and Ansible workflow, you can use the ansible playbook in the ThoughtSpot community repo as shown below

Then execute the following commands:

Your environment is now setup and ready to go.

Step 2: Download the ThoughtSpot release binary and the MD5 checksum

The software binaries for ThoughtSpot need to be downloaded to the deployment server (make a note of the location where you downloaded these artifacts since that will be used later on in the workflow). Contact the ThoughtSpot support team so that they can share the release binaries with you (a tar.gz file and a checksum file).

Assuming the deployment system is setup based on the prior steps, we can kick-off the provisioning of ThoughtSpot.

Note: You should set AWS access and secret key credentials as environment variables if you have not already done so.

(a) Clone the ThoughtSpot community github repo if you did not do this as part of Step 1 (same repo as used for deployment server).

(b) Review and update the Terraform files to match your environment

Terraform and Ansible artifacts and details 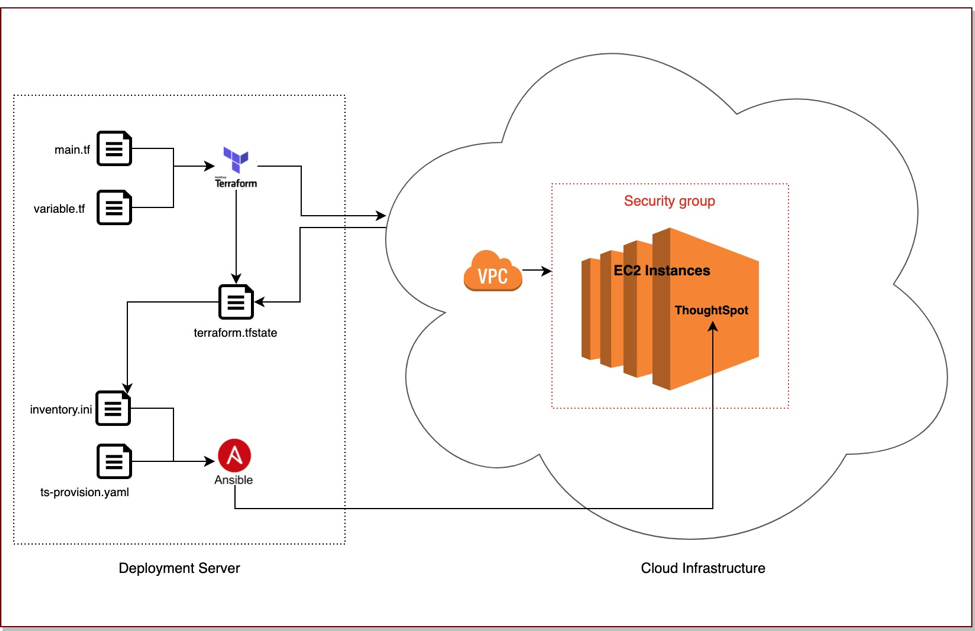 (See the Terraform documentation for details of the CLI commands)

Downloads the providers and modules in preparation for the execution.

Provides a preview of the infrastructure that terraform will create

(iii) Provision the infrastructure and the software

Creates the AWS resources, provisions the software and creates the cluster

The sample outputs of these commands can be found in the sample_output.log file of the ThoughtSpot Cloud deployments repository

(d) Check the health of the cluster

You can login to any of the cluster IPs in order to verify that it is ready. You will need to use the same username/password identified in the prerequisites section above.

Ensure that the cluster is ready for use by checking the status as shown below :

You should now be able to login to the ThoughtSpot home page using one of the Cluster IP addresses. And with that, you’ve ThoughtSpot up and running in the cloud!