What Analytics Tells Us About Belgium’s Chances Against Brazil & France 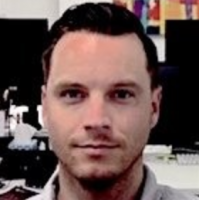 The knockout round of the 2018 FIFA World Cup has begun, leaving the group stages behind in an exciting and peculiar fashion with the focal point being on VAR (Video Assistant Refereeing). VAR has helped lead to a record breaking 22 penalties. Tie that in with late goals, dramatic endings, and huge upsets, and this tournament is on pace be one of the most entertaining ones since the World Cup’s inception.

I have been so enthralled by the history, records, and statistics of this World Cup that I decided to upload the data from the group stages into ThoughtSpot’s search & AI-driven analytics platform to see if I could support my assumptions the heavy hitters will ride their favorite’s tag all the way to the final. With so many stats, from types of goals scored to percentages of the game played in the oppositions third to inaccurate short passes, just knowing where to start seemed to be the hardest part.

Finding my Starting Point with SpotIQ.

SpotIQ is ThoughtSpot’s Automated Insights engine. To get started, all I had to do was upload a table of World Cup group stage data and ask the system to Auto Analyze. With one click, it instantly searched across every intersection of rows and columns to return outliers and interesting points. I didn’t know exactly where to begin exactly, but with SpotIQ’s help, I had my starting point. 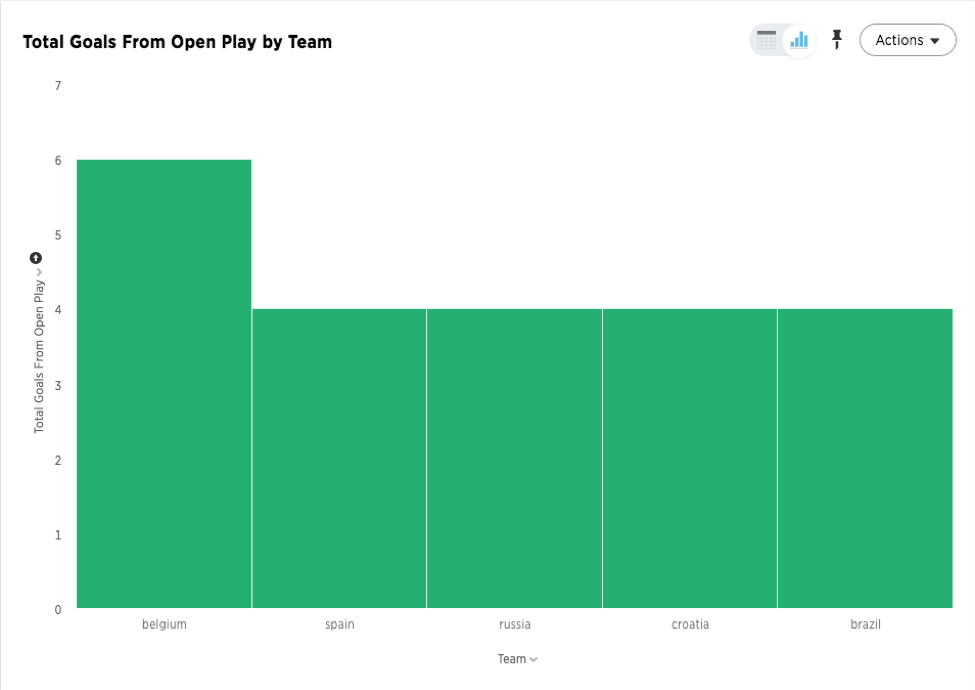 To my surprise, it returned a bar chart displaying Belgium scoring 1.5x more goals from open play than the next closest team. This is interesting because I’ve seen so many goals from penalties and free kicks like Portugal’s Cristiano Ronaldo’s (Real Madrid) late equalizer against Spain. Goals from open play means Belgium is creating scoring opportunities through the team’s formation, passing, and movement.

Getting Deeper and more Specific with Search

After using SpotIQ to help me find a starting point, it was time to drill into Belgium more deeply with ThoughtSpot’s search-driven analytics.

I was curious how Belgium’s passing statistics added up against the field, so I started searching to analyze data points like crosses and short passes. This led me to an interesting insight: Belgium has equal through balls played per game as the two other powerhouses, England and Argentina. They, too, are trying to intersect teams by leading their star goal scorers in Romelu Lukaku (Manchester United) and Eden Hazard (Chelsea) to run onto passes from Kevin De Bruyne (Manchester City) into the space behind the defense. 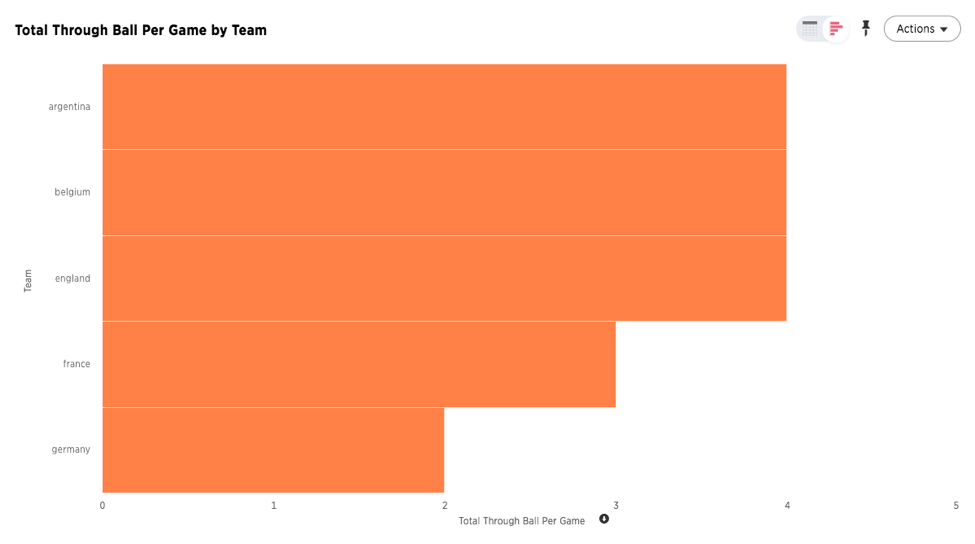 This lead me to ask another question. How many key passes was Belgium making per game? I did another quick search in ThoughtSpot, and instantly got my answer. Not surprisingly, Belgium ranked third with 13.7 passes that either lead to an assist or a shot. This intrigued me to ask another follow up question around how many shots they take a game. Surely enough, they came in third again, just under other two attacking teams, Germany and Brazil.

But where were these shots coming from? Using search again, I was able to see that the majority of Belgium’s shots came from around the penalty area with an average of 10 per game, only bested by Germany… but we all know how their story turned out.

Based on this data, Belgium’s penetrating passing and attack minded play takes them from a historical underdog to being a tournament favorite with statistics only rivaled by the two most successful and decorated teams of this competition (Brazil, Germany). With a win against Japan, Belgium should be able to ride their superior form into the Quarterfinals against a Brazil team who may be Belgium's biggest competition before they play a France team stuck in first gear.

The Data Behind largest Data Breaches: What 7 Charts Tell Us ...

Are Hurricanes Getting Worse? A Story Told in 7 hurricane...

AI is on Its Way to the Enterprise, Bringing Easy Analytics with...

Super Bowl upsets LII: Analyzing How the Eagles Pull Off the...